LORD OF THE SEED

Cylens was propelled downstream, bouncing off rocks and obstructions. His lungs burned. His limbs weighed him down. Suddenly he was up and breathing air, and in that second of clarity, he levitated himself up out of the water.

Vipio swooped down upon his moth and picked Cylens up. Together they returned to Gree and Sarren, who waited anxiously on the riverbank.

There was no time to rest. Earl had been taken into the tower by that Kallithak thing. Everyone crossed the bridge and stormed into the Sanctum. 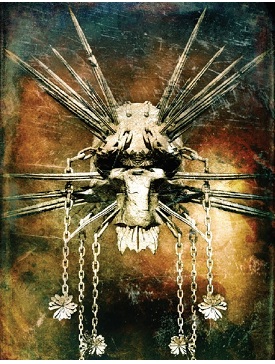 The Kallithak spun around, its blades and flails slicing the air, trying to dislodge Earl from its back. No one was safe from that violent assault. Sparks flashed off the Kallithak’s armor as Sarren launched her wrist-rockets. Gree fired his gun empty and found a vital spot and the Kallithak crashed to the floor. Vipio blasted its unmoving body a couple times with his cell-disrupting gauntlet just to be sure.

As Gree reloaded, the rest of the party looked around for more enemies. The floor was covered in bones, there was no sign of life, and it looked like the interior of this tower was a single large room. A huge cylindrical vessel dominated the room.

Then a pathetic little creature with green skin and pointy ears emerged from hiding. Vipio convinced it to come out. 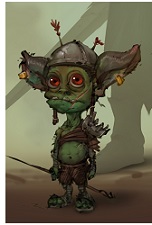 The creature introduced itself as Norbrun, and said it was once a Convergence slave. Not long ago, some flesh-eating brain hemorrhaging datacloud emerged from the singularity and killed everyone—except for the Kallithak. Norbrun explained how the conduits transported people from one Sanctum to the other. Gree shoved him into one of the conduits. Then Gree, Earl, and Vipio followed. Cylens and Sarren rested for a few minutes. They scanned the cylindrical vessel, learning that it was a dangerous singularity that absorbed all matter and energy. 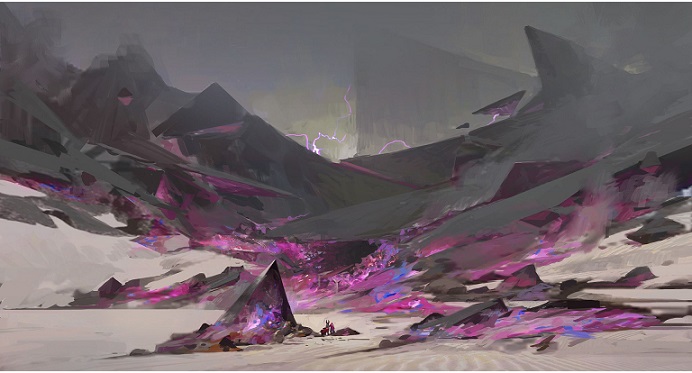 Arriving in the desert just outside the Scorpion Sanctum, the companions saw a battle between Sanctum guards and some chirog abhumans. Crystalline shards slowly drifted high above the plain of the shattered remnants of shards that fell. Some of the shards were as large as cities, and others were as small as a fist or a sliver. The sanctum itself consisted of a tall tower of brown desert stone and five outbuildings. 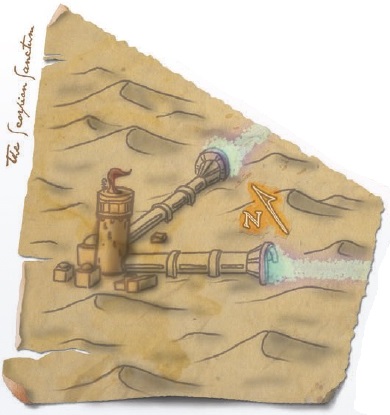 Using the distraction to their advantage, they made their way to the tower entrance. Vipio tried opening the door, but set off an alarm and trap that released poisonous gas that affected everyone but Earl. The gas instilled a sense of extreme paranoia and fear. Earl watched as his friends shouted and screamed and ran and hid. After a minute, the gas’s effects subsided.

Vipio asked Norbrun to keep an eye on his two bears, then he flew up on his moth to scout the upper levels of the tower. He saw a patrol of guards rushing for the front door, but he didn’t have time to warn the others.

The rest of the party met the exiting guards just as Vipio threw a cell-disrupting grenade at the guards, killing them all.

The companions proceeded to explore the first floor of this tower while Vipio flew back outside to check out the top floor. The tower seemed mostly uninhabited. They found storerooms, bedchambers, a kitchen, dining room, and communal area. They did find an administrative office, which contained notes summarizing the plan to tap into Bilu-sha-ziri to gain almost limitless power.

Up on the top floor, an old man with a long, wiry beard, voluminous robes, and a strange, domed hat ordered Vipio to leave, then shot him with a mind blast! 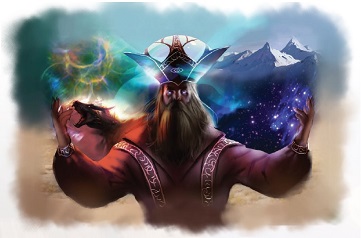 Vipio fled back down to his companions and warned them of the evil wizard up top. They ascended to the second and third floors.

On the third floor, they found a round open chamber with some guards standing watch. Each of these defenders stood on a glass platform that floated inches above the floor, which itself was covered in a metallic grid that pulsed with energy. Gree shot the floating disk out from under the guards, dropping them onto the electrically charged floor and frying them to death.

Gree, Earl, Vipio, Sarren, and Cylens all made it to the top floor, where they spoke briefly with the wizard man whose name was Iom. Behind Iom stood the Venerator: a huge device of metal and glass, 15 feet high and shaped roughly like the diagonal pylons of a pyramid. Cables ran from the support pylons to another device, which seemed to be a perfect cube of utter blackness, 11 feet to a side, floating in the center of the pyramid. While the cloudcrystals, empowered by human souls, fueled the Venerator itself, the machine used the processing power of human brains to handle the extremely complex function of drawing energy from the star.

Gree shot at the floating black cube, which initiated combat. Iom put up quite a fight until Gree tackled him, Earl threw a bag over his head, and Vipio lassoed him and dragged him outside. Iom tried to mind blast Vipio, and Vipio dropped him. The old wizard plummeted to his death.

On the other side, Sarren found them all floating in the vacuum of space! The cables that ran from the Venerator into this chamber seemed to come out through the black cube just a few feet from where the characters appeared. They connected to a metallic pyramid similar to the Venerator but without the living people connected to it. In the distance glowed a bright red star… the Lord of the Seed. 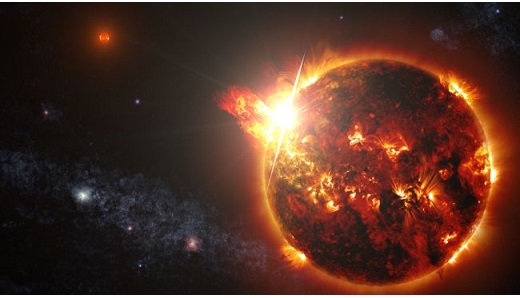 Two figures tended this machine—Evanora and Juthes. The companions recognized Evanora, but Juthes was a new threat. She had short pink hair and glowing red eyes. She wore a number of devices and implants that granted her both a protective field as well as offensive powers. 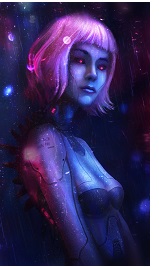 Sarren activated her instant shelter cypher, which gave her and her companions a moment’s respite, before Juthes destroyed the shelter. Gree, Sarren, and Vipio scrambled back to the cube, doing what they could to maneuver in this zero-gravity environment, and returned to their world. Earl and Cylens stayed to fight the two magistrixes.

Cylens got charmed by Evanora and turned on Earl, who had to defeat all three of them now. Earl used a lightning wall cypher to electrocute his enemies, killing Juthes. Evanora tried to escape, but he crossbowed her in the back as she fled. Then Earl grabbed her body and Juthes’s and launched himself back to the cube.

Cylens stayed behind to interface with the pyramid, which he learned bent space to tap directly into the heart of Antares and transmit that energy to the Venerator in the Scorpion Sanctum, where the power was managed through the connected humans.

Gree went around unplugging all the captives, which seemed to kill them. Sarren tried releasing them without hurting them. Vipio ran downstairs to see if he could find a way to shut down the Venerator.

Earl emerged from the black cube to land on the floor with his two dead magistrixes. Gree gave him a big hug.

Back in the star-chamber, Cylens attempted to interact with the black cube from his side, but he ended up disabling it, trapping him in this place forever! He used a device on Evanora’s floating disk to transport him back to the top of the Scorpion Sanctum. Then he levitated in through a window to reunite with his companions.

With the Convergence plans foiled, their machine disabled, and all their leaders slain, the companions discussed what to do next. Gree wanted to take the black cube back to Auspar to try to power it up again, but it was too big to remove from the tower. Earl would go with his brother wherever he went. Vipio and Sarren were up for whatever, so they offered to join Gree and Earl on their journey back to Auspar.

Cylens wanted to stay here and study this Sanctum some more.