Cylens, Earl, Gree, Sarren, and Vipio spent some time in Kordech, resting, interacting with the locals, and upgrading their gear. They learned that cloudcrystals were being made into dust and consumed; the bartender, Hobbs, asked them to go back to Auspar to get him more dust for cheaper; the baron asked them to help put an end to the bandit raids; they were sent by Orridus to retrieve a “recording device” (that turned out to be a viral bomb) from a pack of murdens; and the Aeon Priests asked them to go get numenera from a witch named Evanora.

After a few days travel southward, the party arrived at the location of this so-called witch, as evidenced by the giant ship half buried in the ground. They also noticed herds of sheep and goats grazing all around the area. Cylens spotted a line of smoke—probably from a campfire—drifting out from an open door on the side of the ship. Earl sneaked ahead, but he spooked the herds and a grumpy old lady came running out of the ship to confront him. Her manner was quite rude. Time was clearly of the essence to her. Earl returned to the rest of the party to report that there was, in fact, a witch living here.

Sarren and Cylens were volunteered to go speak with the witch while Gree and Vipio did some fishing by the stream. Earl trailed after the two nanos, this time with better luck staying hidden.

From their conversation with the witch, Sarren and Cylens learned that her name was Evanora Mnoma, and she had been living in this ancient crashed spaceship most of her life. She moved here many years ago from Beoth, a holy city to the south, forsaking the teachings of the Order of Truth in favor of more selfish motivations. Recently she was contacted by the Convergence, hired for her knowledge of astronomia, and was just packing up to leave when the adventurers arrived. Evanora knew about the cloudcrystals, where they came from and what they did. She didn’t know anything about grinding them into dust, though, but she acknowledged the dangers of doing so, given their life-stealing and shadow-making properties.

Earl made his way back to Gree and Vipio and suggested exploring the rest of the ship while the witch was distracted. They all entered the ship through one of the many gaping holes in its hull. They found a large cargo hold. Vipio phase-shifted through a big double-door, discovering a moldering old pantry on the other side and a couple more doors. Earl heaved the door open. All the noise he made attracted three giant moths who swooped down from the ceiling to attack them! 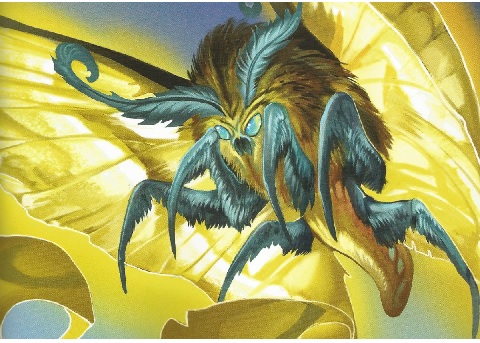 Evanora asked Cylens and Sarren if they had any cyphers to trade, how knowledgeable they were about numenera, and whether or not they wanted to join “the Convergence.” When she was confident that they were loaded with loot and could not match her in power, she blasted them with an onslaught esotery, stunning them, then she stole a couple of their cyphers and teleported away.

One of the three moths attacked Earl. Vipio snapped at it with his energy whip, and Earl finished it off with his machete. Two other moths swarmed upon Gree. They shed a cone of flesh-withering light from their wings, but he was able to rush past them up the stairs to safety, shooting back at them as he went. Earl killed one with his crossbow. Vipio lassoed the remaining moth, trying to hog-tie it, but the moth flew away, carrying him along with it! They flew high up into the air, hundreds of feet, before Vipio managed to gain control of the creature and maneuver it back down to the ground.

Exploring upstairs led Sarren and Cylens to an observation deck with broken windows all around, and further upstairs to a commander’s deck.

Here they encountered an astraphin monolith that fired a beam of psychic energy at them!

Sarren rushed up close to it, hoping it wouldn’t be able to target her there; Cylens followed suit. But the monolith emitted a burst of burning heat! Sarren retreated downstairs just as Gree was coming upstairs. She told him about the monolith. Gree ran past her to find Cylens attempting to throw his portable hole over the monolith to trap it inside. With the two of them working together, they actually managed to do it!

The rest of the spaceship appeared to be mostly lifeless, damaged beyond repair, and already looted. The companions did find Evanora’s apartment in the captain’s cabin, which was filled with various tools, parts, books, and furniture. Almost everything of value had been taken. It seemed she had no intention of returning here again. Sarren found an empty birdcage which had been used for messenger birds. Next to the cage were a few leather message holders and some blank strips of paper. On the other side of the cage was a bowl with slips of paper—messages that Evanora had received. Many of these appeared to be technical, and even the two nanos who were knowledgeable about the numenera couldn’t make much out of them without any context. Two messages were of particular importance. The first read, “If this plan succeeds, and the Venerator works, Bilu-sha-ziri will make us powerful beyond the dreams of man.” The other read, “The simplest way is to travel using the conduit in the Empty Sanctum.” Cylens recalled that Bilu-sha-ziri meant “the Lord of the Seed” in a long-forgotten language.

After returning to Kordech, the companions learned that they were no longer welcome in this town. Apparently there was a misunderstanding between Gree and Fredricks, who ran the two Aeon Priests out of town. Gree realized that the priests had been working on his slugthrower artifact—he had to track them down! Fredricks said they’re probably headed for Qi, the largest city in the Steadfast and also the home of the Order of Truth and the Amber Pope himself. Earl assured his brother that the priests were probably moving slow, so they had time to go deal with the bandits first.

Instead, Gree went to Hobb’s Saloon to find Orrudis, who led the companions to the secret tower of his baroness, Fialla Nooran, about a day’s ride north of Kordech.

Orrudis brought them to an ancient tower made of shifting sections of a ceramiclike synth and glass. Outside the tower, two guards armed with crossbows, with trained houndlike beasts with orange scales and leathery frills, challenged them. Orrudis assured the guards that these adventurers were here to speak with the baroness.

Fialla Nooran, also known as the Spider Knight, greeted the adventurers warmly. While she was disappointed they hadn’t found the “recording device,” she offered them food and drinks and a place to stay for the night. She claimed to be the great-granddaughter of the deposed Queen Nooran of Kordech, and she was gathering an army of murdens and bandits—mostly veterans of wars with Thaemor—to take back what was rightfully hers.

That night, Gree and Fialla sparred. Fialla won, but was impressed with Gree’s abilities. She told him of her plans to release a virus upon Kordech and repopulate the town with her own henchmen. She, of course, had taken a supplement that made her immune to the virus’s effects. The treacherous murdens who had stolen away with her virus also took the remainder of her antidotes as well. Gree, who secretly possessed the virus, and had distributed antidotes to his companions, listened to all Fialla had to say. Then he left to confer with them.

It was decided to make a show of joining the bandits, but then leave first thing in the morning and try to track down those two Aeon Priests who’d taken Gree’s slugthrower. After all, if they were headed for Qi, which was southwest of here, it was sort of on the way to Ghan anyway.

THE MACHINE IN THE WALL