The companions finally made it to Jaston, in the kingdom of Ghan. The walled town was built like a set of circles surrounding a pool constructed to hold water, like a well, except this water was foul and undrinkable. They presented themselves to the local lord, a man named Guyan, who invited them to his home for tea and conversation. The town’s Aeon Priest, Kuipania, joined them.

It was revealed that the water purifier the companions had been sent here to steal had in fact already been stolen by someone else. Guyan expressed his concern about the welfare of his people, who had been without fresh water for three days now. The water from the streams that fed into the town’s well was not fit for drinking—thus the need for the water purifier, which condensed pure water from the air itself. 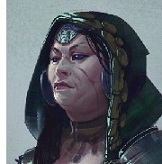 Neither Guyan, Kuipania, or anyone else in town had any idea how the machine worked, so nobody was really in charge of maintaining it. The machine that once sat in the center of the town, purifying the wellwater, was huge, so it wasn’t like anybody could have stolen it away easily and undetected. Cylens asked for suspects. Guyan didn’t have any, though he did mention that beastmen called margr prowled these hills at night. Kuipania dismissed the margr as beasts no more intelligent than animals. There’s no way margr could have snuck into town and stolen that giant heavy purifier.

Gree, wishing his brother were here (Earl knew a lot more about tracking and hunting), inspected the area around the pool. He found tracks in the mud— big tracks, like those of a giant wolf. It appeared as though the tracks led up to the well, then back through town. The party followed Gree as he followed the tracks. They passed by a house that looked like it had a landfill out back. Cylens scanned it, noting the possible oddities and cyphers among the piles of scrapmetal and rubbish. When a stout old woman came outside to berate them all for trespassing, Gree complimented her and managed to convince her to give him and each of his friends a loaf of fresh honeybread. Apparently she was the town’s baker, and a hoarder as well.

The tracks led north, out of town. Eventually the companions happened upon a river of fetid water, over which spanned a bridge. They found about a dozen bodies here, all impaled and chopped and, in some cases, fed upon. Bandits—or, rather, what was left of them. Cylens assumed these bandits must have been victims of a margr attack. Since margr usually only raided at night, and it was currently midday, they had nothing to fear.

Gree picked up the “wolf” tracks again. He thought the tracks were older than the scene of carnage here, so their quarry must not have had anything to do with the slaughter at the bridge.

Continuing on, they made it to a very strange-looking building surrounded by small glowing mushroom-shaped objects. Vipio scouted overhead on his moth. 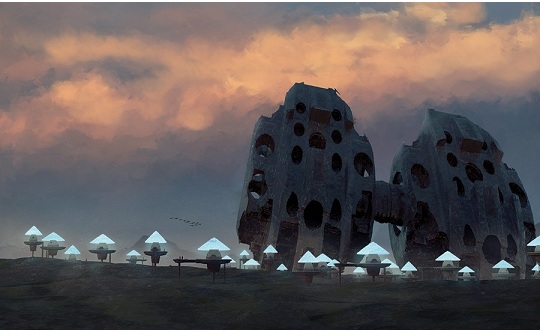 He spied two cyber-coyote looking creatures down below. He swooped down to have a closer look. The cyber-coyotes, or “cyotes,” paid him no mind as he perched with his moth upon the roof of the building. Then Vipio pulled out his femur-bone club and banged it on the side of the building, which sounded like it was made of metal. He shouted at the cyotes to come out and face him. Six more of them emerged from the building, looking up at him curiously. 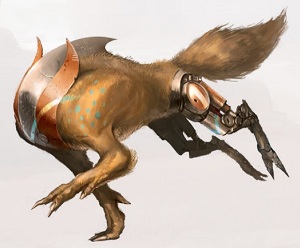 Cylens, Sarren, and Gree were just about to emerge from hiding and approach the building when two robed figures emerged from the building. The three companions ducked back down. 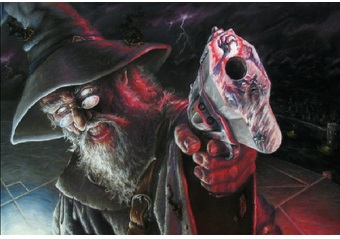 Gree swung up onto his yakul and charged toward the building, with Cylens close behind. Sarren, more cautious, made her way after them, sprinting from cover to cover on foot to remain hidden.

Vipio used his shield to slide down the side of the building and land beside his two attackers. The cyotes all rallied to the defense of their masters, leaping at Gree and Vipio and slashing with their unnatural metal claws. The two robed figures fled back into the building.

The cyotes swarmed upon Gree and Vipio, overwhelming them. Cylens attempted to mind blast one of the cyotes, but he pushed too hard and the creature exploded, injuring his two desperate companions even more than they already were. Vipio tried whipping one of his attackers, but the creature emitted a strong magnetic pulse that threw him back and at the same time absorbed his whip and his shield into its metallic head. Gree ducked and weaved through his enemies, shooting and stabbing even as their claws ripped at his armored limbs.

Sarren blasted a bunch of cyotes all at once with a flash of mental energies.

Vipio, enraged by the loss of his armaments, closelined one of the creatures with his energy gauntlet so hard that his whip and shield materialized out from the cyote’s head, clattering onto the ground beside him. It would seem these cyotes could absorb numenera items, and return them just as easily. That must be how they took the water purifier!

Finally it occurred to Cylens to try to talk with these creatures, since they were made of both flesh and machine. One of the cyotes told him that they called themselves iani, that they only recently ventured out from their lair, after having dwelt motionless in darkness for millennia. The iani also told him that they served their two masters because these humans treated them kindly and offered them protection and knowledge of the outside world.

Cylens convinced his companions to stop fighting, to lay down their arms. 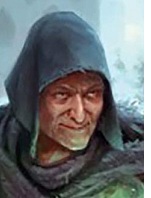 Only then did the two robed figures re-emerge from the building. They said they were magisters of the Convergence. They arrived here from the Golden Sanctum, up north in the Westwood, with plans to strip this area of its numenera to bring back with them. The water purifier was only one artifact of many they had taken so far. Sarren told them that the people of Jaston needed that water purifier, that they would surely die without it. The two magisters scoffed at her, arguing that the people of Jaston were replaceable, but their own research into the star that would make them all-powerful was more important. They needed the purifier more than the people of Jaston did.

That did not sit well with the companions. They conferred together quietly, coming up with a plan to kill these evil wizards and return the purifier back to Jaston. They made a show of befriending the two magisters. Gree said they’d been sent by a fellow Convergence member, Matchitehew, back in Castle Sarrat, to retrieve the water purifier for him (which was sort of true, actually). His charming deception worked, and the magisters allowed him and his friends to rest and recuperate here for the night.

As darkness fell, and the companions joined the two magisters at their camp just inside the metal building, the magisters said they’d been selling cloudrystal dust to Naraniel at Castle Sarrat to help fund their world-dominating project. About five years ago, the Convergence made an amazing discovery. At some point in one of the prior worlds, ancient scientists created a chamber that was larger on the inside than the outside. Although this kind of spatial warping was interesting, it had been seen before. What was truly remarkable was the size of the chamber’s interior. From one end to the other, the chamber’s width stretched hundreds of times the distance between the Earth and the sun—approximately 160 billion miles. What’s more, the ancients placed an entire star at the center of this chamber—a red giant once called Antares, now known as Bilu-sha-ziri, or “Lord of the Seed.”

Evanora Mnoma, an outside consultant and expert on the fusion of flesh and machine, joined the Convergence to help work on a diabolical machine called the Venerator inside the Scorpion Sanctum that used “full” cloudcrystals to fuel the gateway to this star chamber.

These cloudcrystals sapped the lifeforce of any who went near them, leaving their victims as mere shadows. Once a crystal absorbed enough lifeforce, it became “full” and could then be crushed into powder and consumed. Members of the Convergence had figured all this out, and they were making a lot of money selling this cloudcrystal powder.

This was a turning point for Sarren, who realized now that her cousin Nalia had been murdered for just this purpose. She resolved to put an end to the Convergence and their plans.

It was also during that night that Cylens continued speaking with the iani, learning that they were new to the Ninth World, that they dared not venture far from their lair, and that they had no idea just how evil these magisters really were.

Sarren inspected the glowing mushroom machine things, and came to realize that this was the cause of the foul waters downstream. If she could disable them, the water would become clean again, and then the people of Jaston wouldn’t need their purifier anymore. Sarren got Cylens to help her tinker with the mushroom-machines and shut them all off.

The two magisters scolded Sarren for shutting the glowing mushrooms off. Margr roamed these hills at night, they said, and those mushrooms were the only things keeping the beastmen away. Now this place was no longer safe. They had to leave now.

Gree pulled out his slugthrower and shot one of the magisters.

The iani watched anxiously as Sarren, Vipio, and Cylens fought their former masters. As members of the Convergence, the two magisters had quite an arsenal at their command, from levitating esoteries to force shield and invisibility cyphers. One of them even detonated a high-pressure explosive that severely wounded Cylens and Sarren. Vipio’s moth used its flesh-searing dust to reveal the location of the invisible magister, which allowed the rest of the party to attack him. The other magister’s force shield was not enough to protect him from Gree’s slugthrower, Vipio’s energy whip, and the mental energies of Cylens and Sarren.

The companions took one of the magisters down, while the other fled deeper into the building. Gree gave chase, but he was too late. The magister activated a teleportation device and disappeared.

After the fighting was over, Gree, Cylens, Sarren, and Vipio discussed what to do next. It was decided to return the water purifier to Jaston, then head back to Castle Sarrat and confront Matchitehew, the Convergence magister posing as an Aeon Priest. Sarren was eager to put an end to this nefarious organization’s evil plot once and for all.

LORD OF THE SEED