The stench of cattle flesh and cattle dung greeted the companions long before they entered the tall stone wall that surrounded Kordech, the last refuge for leagues on a road through a dangerous wilderness. Kordech was filled with sales pens, breeding pens, and slaughterhouses for shiul—massive creatures with four wide horns and valuable meat. The cattle saw their beginning and end in Kordech, but in between they spent their lives grazing in tended herds in the surrounding lands.

Earl noted the high, well-constructed wall that girded mostly crude wooden buildings, animal pens and corrals, and structures cobbled of found sheets of metal or synth, all connected by muddy, dung-filled streets. Somehow this town reminded him of home. 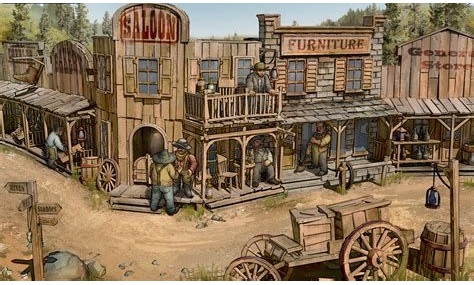 Gree asked a random townsperson where to get a drink, and he was directed to Hobbs’ Saloon. It was here the companions found hot beef, cold beer, and warm beds to reinvigorate them after many long days on the road.

Gree told the bartender, Herman Hobbs, that they’d come from Auspar. Herman, who dealt in drinks, crystal dust, girls, and games, offered the adventurers a job: go to the next deal in Auspar, where he got his dust from, and try to negotiate more dust for less shins. The party said they’d consider it.

Vipio paid the stableboys to take care of Snuffles and Captain Cuddles for him, then the companions explored around town a bit. They found a water processing plant maintained by a crotchety old man, a supply store that one of the townsfolk said was run by a girl who “ain’t right,” a clinic, a church, a small restaurant and cafe, and the armory. Baron Berrich Vordanal controlled all the weapons and mounts in town. Visitors could be armed, but were expected to present themselves to the baron at their first opportunity.

Sarren and Cylens visited the Order of Truth Church where they met Father Reuben, an Aeon Priest, expert in handling, identifying, and using the numenera and other lore.

Reuben’s partner was Mother Margaret, who spent most of her time promoting the Order of Truth. The Priests mentioned a “witch” named Evanora who lived in an ancient crashed spaceship five days south of Kordech. They were certain this witch had access to numenera, and asked Sarren and Cylens to try to procure some for the Order.

Earl and Vipio stopped into the clinic, where they met the overworked and bad-tempered Doc Jean Watts. She told them that bandits had been attacking the ranchers more frequently now than in the past. Earl offered to help her out in exchange for healing supplies, and she was happy to oblige.

The companions spoke with the baron’s right-hand man, Fredrick, who also expressed concern over the more frequent and more coordinated bandit attacks. Fredrick wondered if the bandits had united under a leader now. He said he would introduce the adventurers to Baron Berrich Vordanal in the morning.

Cylens noticed a couple of Fredrick’s rancher friends at the table snorting purple dust. He scanned the dust, realizing only now that this was actually ground-up cloudcrystals! Very unhealthy, as Sarren knew firsthand.

Gree told Fredrick in private that the two Aeon Priests in town killed Tavarana and her party. These Priests now had the mind mastery device that the baron wanted. Fredrick was both surprised and deeply anxious about this (fake) news. He really didn’t want to make enemies of the two “wizards” if he didn’t need to.

Later that night, Gree also met Orrudis, another patron at the saloon, who offered 20 shins and a cypher to each of the adventurers if they would undertake a secret mission for him, and more important, for his poor mistress who was denied her rightful rank of nobility. He wanted them to find a band of evil murdens and recover a recording device that would prove that his mistress, Fialla Nooran, was the rightful heir to the town she was being unfairly denied. He described what the recorder looked like and made it clear that they should not damage, activate, or tinker with it in any way. The device was fragile, he said, and very important. He gave Gree clear directions on how to find the murden camp in the nearby wilderness.

Gree accepted this quest, but he told his companions that they would be doing some birdhunting tomorrow (he did not mention the recording device or Fialla Nooran).

The next morning, the companions ate breakfast at The Golden Shiul. The proprietor of the restaurant, Alice Holt, told them that her fiancé, Smiley, a shiulherder, had gone missing, his last known location being the nearby wilderness to the east. Sarren promised to find Smiley and bring him home.

After breakfast, Fredrick led the companions to a manor on the other side of town, with a garden out front and a metal tower a hundred feet high. He introduced them to Baron Vordanal, who was himself an older, fit man with a tall, angular frame and thick black beard. The baron was well liked by the townsfolk and came across as very smart. He said he planned on using the mind mastery device (which Tavarana had been sent to retrieve, but now it was in Cylens’ possession) on the settlers who’d been moving in on all of his outlying ranges. The Council of Spheres, in an effort to relieve the overpopulated city of Qi, apparently offered free land to people if they moved out east and settled on shiul range-land. The ranchers of Kordech were not happy about this. And the baron said farming wasn’t going to work out here anyway—the land was too arid for growing crops.

The baron gave each of the companions a yakul mount, asking that they seek out this rumored bandit leader and put an end to the bandit attacks once and for all.

The broad plains of Draolis spread out before them. Riding east upon their yakul, back in the direction they’d come from in the first place, the companions arrived at a rocky forest that looked all too familiar.

With the directions Orrudis had given Gree, the companions were able to find the murden camp easily. Earl and Gree took sniper positions up in the trees, Sarren and Cylens prepared their esoteries, and Vipio charged into the camp. They took the murden completely by surprise. The combat did not last long. 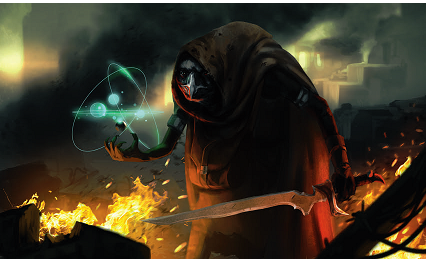 Afterward, Gree interrogated a dying murden, trying to find out where the recording device was. The murden couldn’t understand the language of men too well, but pointed to the chief’s tent, and then bled out. The companions searched the bodies of the fallen murden, finding some shins and a couple oddities. Gree found the recording device in the chief’s tent, but when Cylens scanned it… they all discovered that this device was actually a viral bomb. When activated, it would unleash a horrific, debilitating virus previously unknown in the Ninth World. Gree also found ten doses of an antidote to this virus.

Earl noticed some tracks that were not murden. He followed them to a grisly scene: Smiley had been skinned and hung to dry like game-meat by the murden. Cylens found a knowledge enhancement cypher amid the pile of bloody entrails on the ground. Sarren wanted to bury the body, but Gree and Earl wanted to bring it back to town. Eventually it was decided to wrap Smiley’s body inside a tent-canvas and bring him back with them.

THE MACHINE IN THE WALL

BENEATH THE CITY OF NEEDLES